A few years back, we posted a bit about “digital sharecropping,” the idea of working very hard to build something that somebody else will profit from. I was recently reminded of an example we can look at.

A typical McMansion Hell image as seen on dozens of news sites that reported on the story in 2017.
© Kate Wagner, used for journalistic purposes under the Fair Use Doctrine.

McMansion Hell is an often-hilarious and informative blog about bad architecture, run by a writer-musician-designer named Kate Wagner. In her posts, Wagner examines photos of houses and comments on their features; previously some of those photos were retrieved from real estate site Zillow. In 2017, she got a menacing-sounding letter from Zillow demanding that she remove photos that she had gotten from their site and accusing her of violating their copyrights (which they don’t actually hold). Happily, the Electronic Frontier Foundation and a whole lot of lawyers who understand copyright law stepped up, and between the legal defense and the public shaming, Zillow backed down pretty quickly. In the meanwhile, Wagner briefly took the site offline in order to create an archive, but the resulting “there’s nothing here” page led many observers to assume that Tumblr had deleted the site. 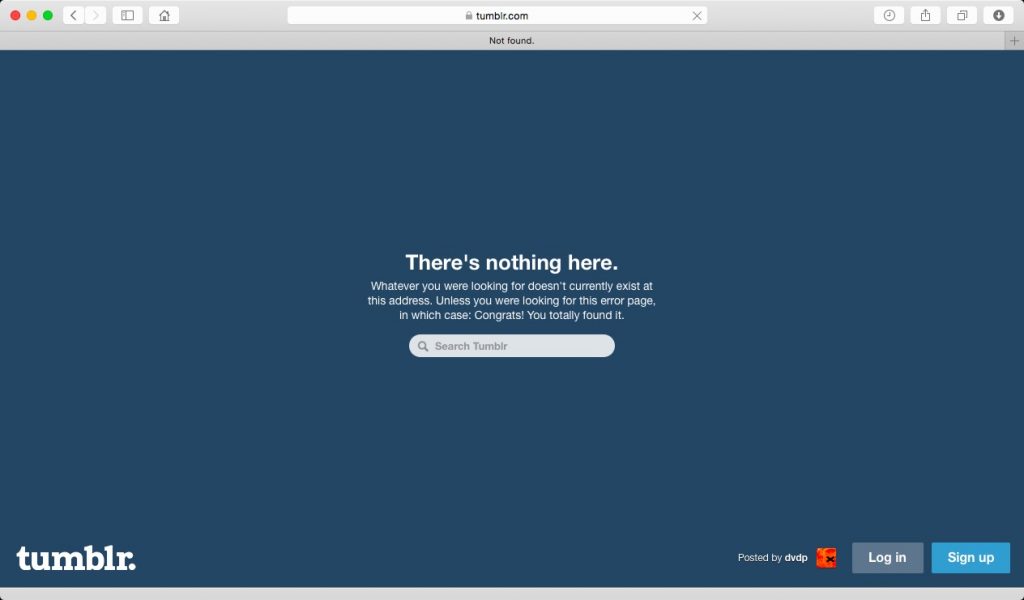 Which gets us to the subject at hand. There is a key point in all of this that went unmentioned in any of the coverage I saw. Although Tumblr did not actually take down her site, the reality is they could very well have done so if Zillow had contacted them with a DMCA notice. Not too long ago, Tumblr abruptly canceled the accounts of thousands of users and took down thousands of pages due to a change in their policies regarding adult content, and were well within their legal right to do so.

This is one of the fundamental problems with digital sharecropping; if, as Wagner said at the time, “this blog is my entire livelihood, if it goes, I lose absolutely everything,” then building it on somebody else’s platform where it can be deleted on a whim is not the best business move.

Let’s say that you’ve created a popular destination online, be it a blog, web comic, video series, or photo gallery. You’re building an audience, making some ad money, selling some products, have a healthy Amazon Affiliate program, your site has become a business; how do you protect your investment?

A personal example: I and some friends co-own a pop culture review site called Atomic Junk Shop. Let’s suppose somebody takes offense at one of our postings and wants to take action against us. (This is a popular harassment technique among trolls and political cranks.) If we were hosted on a free platform such as Blogspot, Tumblr, Instagram, Squarespace, or as a Facebook page, it would be a simple matter for the malcontent to contact that company and demand the removal of the offending material. Said company could, and most likely would, either delete the entry, or more likely, shut down the account and delete the whole site, and there would be very little we could do about it. Even if we fought it, that would take weeks and possibly months, with our site down the entire time, not to mention the expense of mounting a defense and the complete loss of anything that was deleted by the hosting company.

But let’s see what would happen with the way we are set up now. Somebody sees something that annoys them on Atomic Junk Shop, and they decide to go after us. They fire off an email to the Administrator of Atomic Junk Shop, which happens to be me. If they look at the bottom of the page, they find that the site is listed as a project by Lancer Creative Services, so they fire off a threatening email demanding that Lancer take action. (This has happened.) Well, Lancer Creative Services is also me, and I know enough about intellectual property law to know what’s legit, so I will probably respond with a polite denial and a refusal to take down or alter the post.

So then the person goes to their favorite WHOIS site and searches for information about who is behind AJS and Lancer, specifically the hosting company that supports the sites. They look at the DNS records for both sites and learn that both of them are hosted by Handmade Hosting (“Web Hosting Like Mama Used to Make!”) so they fire off an email to Handmade demanding that the offending post and site be burned to the ground.

Whoopsy-doodle, Handmade Hosting is also me. It’s a tiny little hosting outfit I set up to host my own sites and those of a few select clients. We do no advertising or promotion, and most of the other sites I host are charity things or sites for friends.

As it turns out, nobody can legally shut down my site but me. Sure, if they dig hard enough, they might be able to find out where I get my reseller account (it’s in Canada, so a lot of the US laws most abused by trolls do not apply), but that’s not easy, and 99.9% of people are going to hit that brick wall and be left dealing with me.

While we fight back and forth about whatever the issue might be, my site remains up, my revenue stream remains intact, my audience remains engaged. I get to stay in business until a judge says otherwise.

This is why digital sharecropping is a bad idea. Why risk sacrificing a significant portion of your revenue in order to operate at somebody else’s whim? Google, Tumblr, Facebook et al are risk-averse, and they have no compelling reason to defend their users. You are not their customers; you are the product that they sell to their customers, and you are replaceable at a moment’s notice. If they get a cease-and-desist letter, or even just a complaint through their automated system, they can (and most likely will) pull the plug on your site without a second’s hesitation.

If your site is a source of income, you can’t afford to leave it vulnerable on some free hosting service. It’s time to upgrade. Go to one of the many hosting companies like Bluehost or Dreamhost or whoever you like (ask around and get references), then install whatever Content Management System you like (the most popular is WordPress, it’s what we use), and start moving your content off the free platform. You’ll be glad you did.

This entry was posted in Jim's Blog and tagged hosting, law, social media. Bookmark the permalink.

This site uses Akismet to reduce spam. Learn how your comment data is processed.